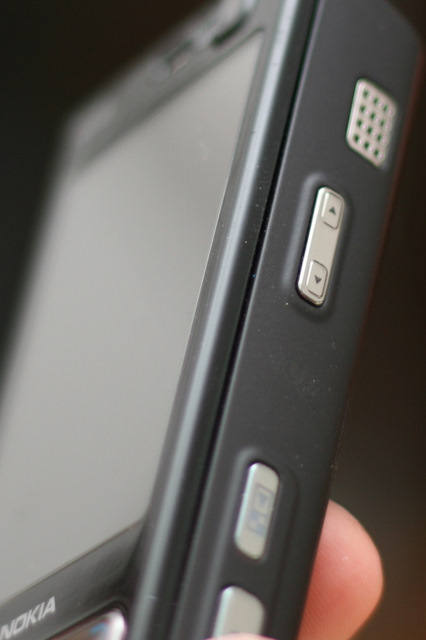 I recently got my hands on a nokia N95. Great.

However, I soon realised that the volume up key doesn’t work, only down works. This was a little unfortunate since it is the only key capable of turning the volume up of music when played with the music player software installed on the device. Something I definitely needed to do once I had managed to turn the volume down to zero percent.

My first idea was to look for some other software I could install that would allow me to alter the volume with another key but I had no luck on that front (let me know if you have).

I then googled around and realised I was not alone and that other people had found success in taking the back off and re-soldering it, so I thought I’d have a bash.

I ended up fixing mine with no tools, just a bit of paper.

Here’s how to take the back off:

You should see the two microswitches, the volume up microswitch on mine was bent upwards. Not only does this mean it doesn’t connect the circuit, but it also won’t be pressed by the outer button.

I simply jammed a bit of paper in there to make the microswitch touch the contacts again.

If this post has helped you fix your phone, show me some love with the flattr link above. Thanks!